The Shire Bright Night – A night set to change a mindset. 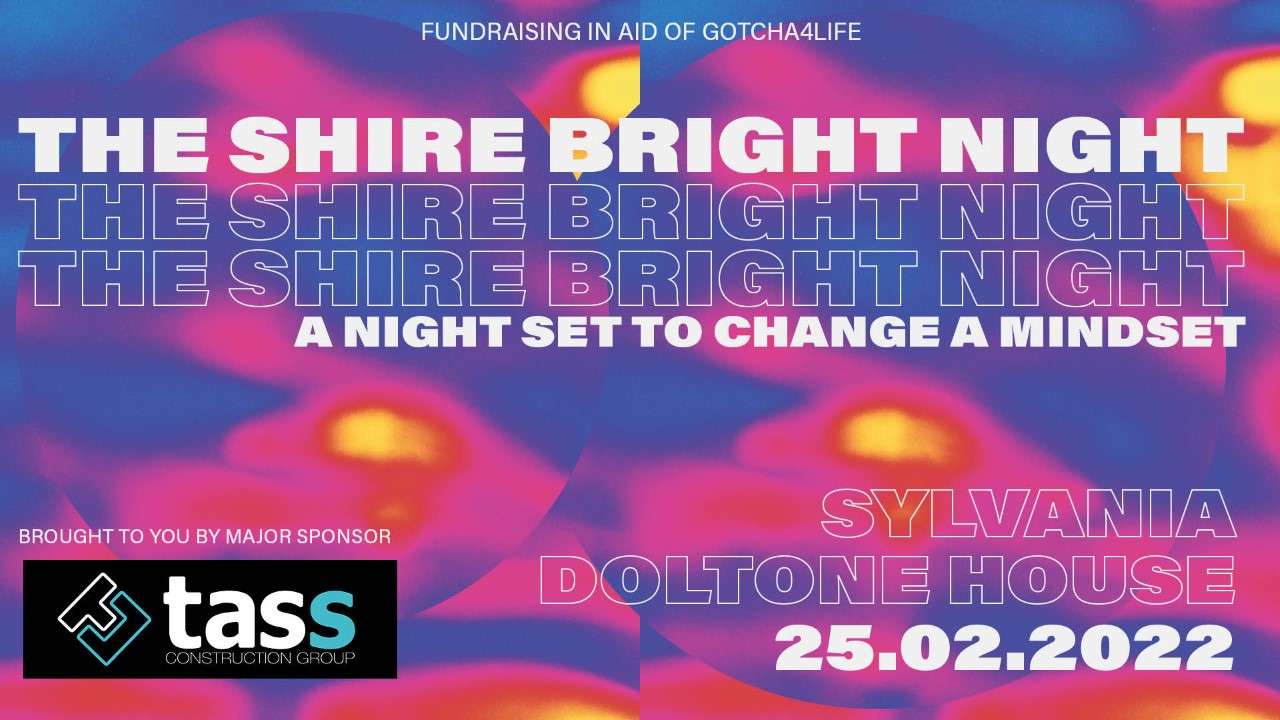 After 2 years of planning event organisers are proud to announce that The Shire Bright Night will be hosted at Doltone House, Sylvania on Friday 25th of February 2022.

The Shire Bright Night is raising funds for Gus Worland’s charity Gotcha 4 Life. The now SOLD OUT charity gala dinner will play host to over 400 guests, all in aid of mental health and building their mental fitness within the local community.

"Everyone deserves to feel supported and safe, especially when times are tough. That's why we do what we do. But we can only continue to deliver effective programs in the preventative mental fitness space through the generosity of our supporters and friends around the world."

The Shire Bright story begins with a group of 6 mates, bound together by a shared passion to change the stigma around mental health within the local Shire community. In a community that remains strong, independent and at times, too afraid to speak up, mental health issues have claimed the lives of many fellow colleagues, mates and family members.

So they decided it was time to shed light on mental health and to break the barriers and stigma of having open and honest conversations about mental health.

Their story begins with Committee member Ryan Jenkins, Ryan found himself in hospital due to what he thought was stress, anxiety and burnout caused by pressure mounted on him in the workplace.

At 25 years old fit and healthy he had no idea why he was getting struck down with migraines, rapid heart rate, high & low blood pressure along with the overwhelming feeling that he couldn't make sense of.

Ryan was in and out of doctors until one night he suffered a panic attack in the middle of the night while he was sleeping and wound up in hospital.

Not known at the time but coincidentally after some assessments and scans medical staff found a large lesion in his brain leading to major brain surgery.

The surgery was a success but the biggest battle was yet to come after facing a deep powerful darkness dealing with his own mental health fight up to 12 months post operation. Ryan was able to overcome his mental health battles with the support of his wife, family and friends.

Whilst feeling he was alone in the battle for survival, it was with the support and encouragement of the people around him including employers Tass Construction Group.

At Tass Construction Group mental health for their employees has continued to remain a main focus for brothers and Directors, Aaron & Ben Tass, encouraging a healthy workplace both physically and mentally.

"Approximately 75% of people who seek help are able to improve notably, and we like to think we’re helping the much needed social and cultural shift that makes talking about mental health not only acceptable, but encouraged." Ben Tass.

As Major Sponsors and with the support of friends Josh Landsberry & Amelia Kemp, together with Tass Construction Employees Ryan Jenkins, Brad Smith and Josh Jones, that make up the committee, The Shire Bright Night was conceptualised.

Binding together with Gotcha 4 Life the committee group started to plan this charity event to raise awareness and much needed funds to help increase the mental fitness of the local community.

ALL FUNDS raised from The Shire Bright Night will go back into our local Shire community, in creating workshops, support, training and education within our local schools, local businesses, local sporting clubs and local community groups aimed to strengthen the mental fitness of male and females, young and old.

The Shire Bright Night would like to say a huge thankyou to all their Principal Sponsors:

And a huge thankyou to their Associate Sponsors:

The night will be filled with high energy entertainment, 3 course meal, beverage bar tab, live and silent auction items and give-away and prize items to be won! We are looking for anyone that will donate prizes for the evening, and any support is much appreciated!